safety tips for the beach bound 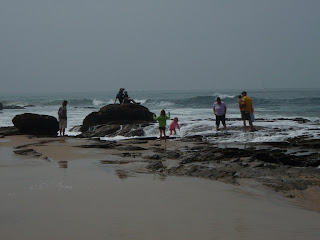 Tom Gill of the U.S. Lifesaving Association shares some advice to make your beach getaway a great, and safe escape for the whole family

There's no doubt the beach is a great escape from the dog days of summer, but you should never underestimate
the power of the sea. A trip to the ocean can pose a range of dangers you and your family should be prepared for
before you leave home. In part three of "Summer Safety," a special series on "Today," Tom Gill, a board of
directors member of the United States Lifesaving Association (USLA), was invited to share some advice on beach
safety. Here are his tips:

When we talk about safety at the beach, it doesn’t just pertain to the water, does it?
Lifeguards are there to protect beach goers in the water and on the beach. There are plenty of potential dangers in
both environments combined with thousands of excited and enthusiastic patrons.

Why do people need to be not only safe in the water, but on the beach as well?
We want everyone to have as much fun as possible while staying safe. Playing football with friends is great, but
not in the middle of a huge crowd of children building sandcastles. Be respectful of others as you would anywhere
else and everyone will be able to enjoy a day at the beach.

How should we prepare for a day at the beach?
Think of a day at the beach as an athletic event: You need to be in shape to handle the conditions (often hot and
hopefully sunny); you need to have the proper protective equipment to play in the game (including sunscreen,
hats, sunglasses and cover-ups for the kids to name a few); and you need to eat and drink well (a good breakfast
and plenty of water).

What are some of the most common injuries on the beach and how can they be avoided?
The most serious medical injuries lifeguards see are spinal cord injuries, often caused by people diving into the
surf. Always enter the water feet first. Waves are powerful forces that can cause injury if a person dives through
with their head in the wrong position.

Other common injuries include fractures and dislocations caused by falls because of the uneven surface of the
sand. Scrapes and cuts and other minor injuries are commonplace among the vacationing public.

Ocean currents: What should we know about them? And what about rip currents?
Rip currents are currents of water flowing away from the beach and are responsible for 80 percent of all water
rescues. Most often caused by breaks in sandbars or obstacles in the water (piers and jetties), they can be short
and powerless or become very strong and extend for hundreds of feet depending on the surf, wind and tide
conditions. Rip currents are hard to recognize while in the water, often it requires a view from a height, (lifeguard
stands for instance) but people can feel them well enough.

If a person feels he or herself being pulled away from the shore by a rip current remember the following:
1. Stay calm: A rip current does not pull people under, only out from the shore and often lasts for a short time.
2. If possible, swim parallel to the shore until the current stops and then swim back toward the shore.
3. Wave and call for help if swimming becomes too tiring or the patron is not a strong swimmer.

What are the most important tips for beach goers?
1. Swim near a lifeguard: USLA statistics over a 10 year period show that the chance of drowning at a beach
without lifeguard protection is almost five times as great as drowning at a beach with lifeguards. USLA has
calculated the chance that a person will drown while attending a beach protected by USLA affiliated lifeguards at
one in 18 million (.0000055%).

2. Learn to swim: Learning to swim is the best defense against drowning. Teach children to swim at an early
age. Children who are not taught when they are very young tend to avoid swim instruction as they age, probably
due to embarrassment. Swimming instruction is a crucial step to protecting children from injury or death.

3. Never swim alone: Many drownings involve single swimmers. When you swim with a buddy, if one of you has
a problem, the other may be able to help, including signaling for assistance from others. At least have someone
onshore watching you.

4. Don’t fight the current: USLA has found that some 80 percent of rescues by USLA affiliated lifeguards at
ocean beaches are caused by rip currents. These currents are formed by surf and gravity, because once surf
pushes water up the slope of the beach, gravity pulls it back. This can create concentrated rivers of water moving
offshore. Some people mistakenly call this an undertow, but there is no undercurrent, just an offshore current. If
you are caught in a rip current, don’t fight it by trying to swim directly to shore. Instead, swim parallel to shore
until you feel the current relax, then swim to shore. Most rip currents are narrow and a short swim parallel to
shore will bring you to safety.

5. Swim sober: Alcohol is a major factor in drowning. Alcohol can reduce body temperature and impair swimming
ability. Perhaps more importantly, both alcohol and drugs impair good judgment, which may cause people to take
risks they would not otherwise take.

6. Leash your board: Surfboards and bodyboards should be used only with a leash. Leashes are usually attached
to the board and the ankle or wrist. They are available in most shops where surfboards and bodyboards are sold
or rented. With a leash, the user will not become separated from the floatation device. One additional
consideration is a breakaway leash. A few drownings have been attributed to leashes becoming entangled in
underwater obstructions. A breakaway leash avoids this problem.

7. Don’t float where you can’t swim: Nonswimmers often use floatation devices, like inflatable rafts, to go
offshore. If they fall off, they can quickly drown. No one should use a floatation device unless they are able to
swim. Use of a leash is not enough because a non-swimmer may panic and be unable to swim back to the
floatation device, even with a leash. The only exception is a person wearing a Coast Guard approved life jacket.

8. Life jackets = boating safety: Some 80 percent of fatalities associated with boating accidents are from
drowning. Most involve people who never expected to end up in the water, but fell overboard or ended up in the
water when the boat sank. Children are particularly susceptible to this problem and in many states, children are
required to be in lifejackets whenever they are aboard boats.

9. Don’t dive headfirst: Protect your neck: Serious, lifelong injuries, including paraplegia, occur every year due
to diving headfirst into unknown water and striking the bottom. Bodysurfing can result in a serious neck injury
when the swimmer’s neck strikes the bottom. Check for depth and obstructions before diving, then go in feet first
the first time; and use caution while bodysurfing, always extending a hand ahead of you.

10. At home, you’re the lifeguard: Drowning is the leading cause of accidental death in many states for children
age one and two. A major reason for this is home pools, which can be death traps for toddlers. Many of these
deaths occur in the few moments it takes a parent to answer a telephone or doorbell. Never leave a child alone
anywhere near a pool. Make sure it is completely fenced, that the fence is locked, and that there is no access from
the home to the pool. Don’t let your child or a neighbor’s child get into the pool when you’re not there.
Who should wear life vests?

On the beach, anyone who cannot swim should not be in the water above his or her waist with or without a
flotation device. A surf environment is a dynamic environment that can change by the minute. Everyone should
stay close to the shore and follow the lifeguard’s direction on how far they should go out in the water.
Are flotation devices suitable for the beach?

Parents may feel safer because their children have a vest on, but there is no substitute for parents watching their
children every second and always accompanying them into the water.
What about the recent shark attacks? Do we need to be concerned?
1. Shark attacks are rare, especially on large beaches with lots of swimmers.
2. The ocean is a shark’s home and we need to respect that. But sharks do not consider humans a favorite meal
and attacks are often a mistake.

Helpful suggestions:
-Do not swim near sunrise or sunset.
-Do not wear shiny or reflective jewelry.
-Stay out of large schools of fish that are often prime targets for aquatic predators.
-Do not stray far from shore! Both of the attacks occurred on or near sandbars away from the shoreline. There are
many reasons to stay off the outer sandbars besides the animal life, including changing tides that can cause the
troughs between the outer sandbar and the shore to become deeper and harder to cross for the weak swimmer.
Plus it makes it that much harder and longer for the lifeguard to reach you if you have a medical problem in the
water. Stay near the shore and off the sandbars.

Other thoughts:
Lost children: Especially on holiday weekends, beaches are packed; we have been known to work over 100 lost
and found children cases in one day during the weekend. Things to remember: Small children are not going to
rush into the water (it scares them); remember what your children are wearing so you can give a proper
description if they are lost; and go to a lifeguard stand so they can quickly help to reunite you and your child.
However, all of this causes the lifeguard to take away focus from the water, so don't lose your children!

Medications: A vacation is not an excuse to stop taking regular medications, leave the inhaler at home or
drastically change a person’s routine, especially those with pre-existing medical conditions.

Alcohol: Just like drinking and driving don't mix, nor does drinking and swimming. Alcohol is a leading cause of
drowning. We ask everyone to save the partying (in moderation) for the evening after they have left the beach.

For more beach safety tips you can visit the U.S. Lifesaving Association Web site at:
http://www.usla.org/default.asp
Posted by once upon a time... at 7:35 PM