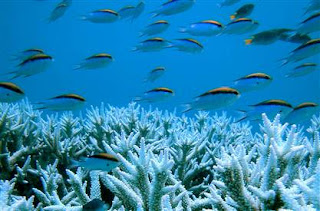 POZNAN, Poland - A downward trend tied to warming seas has not reversed and the world has now lost nearly one-fifth of its coral reefs, according to a global survey released Wednesday.

Much of the rest could be destroyed within 40 years by increasingly acidic seas if warming continues unchecked, the Global Coral Reef Monitoring Network stated in its report.

"The report details the strong scientific consensus that climate change must be limited to the absolute minimum. If nothing is done to substantially cut emissions, we could effectively lose coral reefs as we know them, with major coral extinctions," network coordinator Clive Wilkinson said in a statement.

The report was released on the sidelines of the 190-nation U.N. talks on a new climate change treaty. Thousands of delegates are negotiating this week in Poznan, Poland.

The International Union for Conservation of Nature, which maintains a list of threatened species worldwide, cited warming as the latest and most serious threat to coral, already damaged by destructive fishing methods, nonnative species and pollution like raw sewage.

"If nothing changes, we are looking at a doubling of atmospheric carbon dioxide in less than 50 years," Carl Gustaf Lundin, head of the IUCN Global Marine Program, warned in a statement. "As this carbon is absorbed, the oceans will become more acidic, which is seriously damaging a wide range of marine life from corals to plankton communities and from lobsters to seagrasses."

"The world has lost about 19 percent of its coral reefs during the last 20 years," added the IUCN's director general, Julia Marton-Lefevre. "If current trends in carbon dioxide emission continue, many of the remaining reefs will be lost in the next 20 to 40 years," she told reporters in Poznan.

"Climate change must be limited to the absolute minimum if we want to save coral reefs. We need to move forward and substantially cut emissions," she said.

Increasing carbon dioxide levels in the atmosphere, which fuels global warming, is raising the level as well as the temperature of the oceans, said Olof Linden of the World Maritime University in Malmo, Sweden. That makes the water more acidic, adversely affecting reef-building coral that rely on calcification to build their shells.