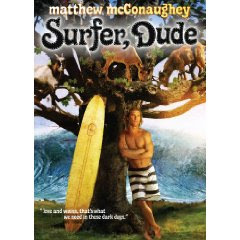 "Love and waves, that's what we need in these dark days."

Would you believe that actor Matthew McConaughey stared in a movie that went straight to DVD? McConaughey's new movie, Surfer, Dude, is bypassing movie theaters and being released direct to DVD tomorrow and is available for $20.99 on Amazon.

How is it possible that McConaughey just starred in a movie about a pot-smoking wave rider and no one knew about it? Two weeks ago, Dude showed in an Austin theater to a dismal $6,000 before expanding to 69 screens, including a bunch of seaside locales. Its total gross at press time: $36,497.

What happened? Seems Dude was little more than a $6 million passion project for the actor, and even the promise of his shirtless surfing couldn't entice studios to release it -- especially since we all see the same thing on Internet blogs every day. So he turned to Anchor Bay, a direct-to-DVD company that gave it a limited theatrical run with no TV ads to support it. That was probably a good idea: Dude's Metacritic score is a depressing 16 out of 100, which proves that no amount of pecs appeal could have saved this wipeout.

Buy it now on Amazon.com. Woody Harrelson also stars in the film.
Posted by once upon a time... at 1:56 PM

You should really consider proofing your stories prior to submitting. Just a thought.