Superyacht Race Lavish As Ever 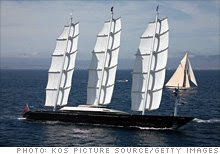 Despite seemingly hard times, an annual yacht race in St. Bart's is expected to be as illustriously high-end as ever. (Pictured is a 289-foot Maltese Falcon, the biggest trophy in the fleet, owned by venture capitalist Tom Perkins's).

NEW YORK (Fortune) -- Marie Antoinette was no mistress of the high seas, but she'd probably feel quite welcome this weekend in the blue waters of the eastern Caribbean.

Beginning Thursday, 35 of the world's great sailing superyachts gather for the St. Barts Bucket Regatta -- a glorious display of wealth and merriment in an exclusive French colony where the doomed queen would've fit right in. At the regatta, with venture capitalist Tom Perkins's 289-foot Maltese Falcon as the biggest trophy in the fleet, it's caviar and champagne for everybody! Except for the peasants on shore gawking at the gleaming hulls and masts rising toward the heavens -- let them eat, well, sand! Boats with saunas and hot tubs, boats with movie theaters and flat-screen TVs in the head, pastry chefs, Monets, remote-control window shades -- come to think of it, wouldn't John Thain love the life of sailing?

It is a testament to either tone-deafness or the culture of mega-wealth (or both) that this year's Bucket is bigger and better than ever. There isn't even enough space at the dock for the 35 boats, whose combined footage is just under a mile. If you have sufficient millions -- and it can cost a few of them per year to pay for insurance, fuel and a professional crew that can number 20 on a big boat -- it may not really matter much if your portfolio drops 10 or 30 percent. Nor may you particularly care if the proles are offended by your profligacy, though some yacht owners these days are increasing security and trying altogether to avoid ports like Monte Carlo and Saint-Tropez that are known for paparazzi. Hank Halsted, a Newport, R.I., yacht broker who organizes the Bucket, has a more forgiving explanation. "Of course we're knee-deep in tough times," he says, acknowledging that the international array of hedgies, traders and CEOs who gather aren't oblivious to the worldwide economic mess. "But people want to get back to having a good time." You can always count on the superrich to keep things in perspective.

It's not for nothing that the informal motto of the Bucket is "Win the Party." Or that Halsted calls himself a "primary ringmaster of this menagerie of really big 10-year-olds at camp." In 2005, Canadian doughnut prince Ron Joyce airlifted live lobsters in from Prince Edward Island for supper. Another year, Minnesota financier Hap Fauth turned his 116-foot sloop into an all-night disco. Last spring, sometime-local Jimmy Buffett and his Coral Reefer Band put on a surprise benefit concert (with the proceeds generously buying a CT-scanner for the village hospital). There's talk this week that Buffett may stop by again to entertain what will be 700 Bucket participants and guests.

But while partying's nice, the regatta itself is not for the timid. What began as a "gentleman¹s race" in New England in 1986 -- the "Nantucket Bucket," to celebrate a birthday for publishing magnate Nelson Doubleday Jr., who wanted to have a band play aboard his 125-foot schooner Mandalay -- is now an intense affair, befitting the fellows who typically made their money by stomping on their competitors, which is how they came to own gigantic sailboats in the first place. There's something richly amusing about several dozen of the planet's most powerful tycoons all jockeying to harness something they can't much control: wind and weather. They surely do try.

Because the boats are different sizes and capable of different speeds, they're subject to a quirky handicapping system. That means attempting to game the system mathematically. Quant kings, meet the race committee, which also emphasizes in the rules that "bribes can get you anything in the Bucket." The slower your boat's supposed to be, the better starting time you get; the fastest boat starts last and has to pursue every other boat on the course -- first across the finish line wins the Bucket trophy. The slowest skipper gets the Escargot Cup, which is an empty can of snails. With such obloquy at stake, almost nobody actually steers his own boat. Instead, you bring in America's Cup talent -- "consultants," by any other name. The point is to have fun. Winning is funner. Aside from hiring bartenders, Halsted says, "The crux of my job is to arrange dogfights among nautical 747s without anybody getting hurt." Nobody's been killed yet. They wisely got rid of the rule from early years that the first race began with daiquiris.

Not everything is jolly in the business of big yachts. There are many signs that the recession is pummeling demand for both sailboats and motorboats. Industry insiders say new orders -- for vessels that wouldn't be delivered for two or three years -- are down and several current projects are being scaled back. It has been widely reported that the giant Italian luxury-yacht builder Ferretti is in deep financial trouble. Sales of existing boats are down by as much as 40 percent, according to some estimates. A few of the superyachts that owners bring to the Caribbean from the Mediterranean for the winter charter season stayed in Europe because there weren't any customers; crews have been laid off. "Not everyone has money accumulated under the pillow, able to weather this storm," says Jill Bobrow, editor of ShowBoats International.

Still, the Bucket extravaganza in St. Barts suggests that at the tippy-top of the luxury market, the yachting class just keeps sailing along. There's a reason Perkins revels in having the colorful pennants on the Falcon's carbon-fiber masts semaphore this message: "Rarely does one have the privilege to witness vulgar ostentation displayed on such a scale." The emir of Dubai has just unveiled the world's largest yacht, the 531-foot Dubai. The $350-million motorboat accommodates 115 and has eight decks and even a helipad. It's so big it ought to have its own gift shop, but you couldn't get close enough to shop anyway. Roman Abramovich, the Russian billionaire, aims to beat him with the 555-foot Eclipse, still under construction. According to the yachting press, the Eclipse will be equipped with armor plating, bulletproof windows, a missile-detection system and an escape-submarine. It's unclear who might be out to get him, but things could be worse. If Abramovich lived in Fairfield County, the neighborly frenzy might make AIG-rage seem tame.

As they used to say during an old European revolution, off with his head!

By David A. Kaplan

David A. Kaplan is the author of "Mine's Bigger: The Extraordinary Tale of the World's Greatest Sailboat and the Silicon Valley Tycoon Who Built It," which won the 2008 Gerald Loeb Award for best business book of the year.
Posted by once upon a time... at 4:05 PM No comments: 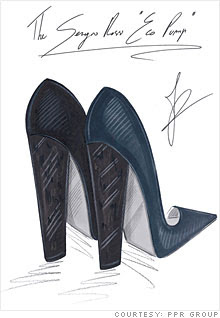 The luxury brand is getting more eco-friendly, but that could open its brands up to some unwanted scrutiny. (Pictured is a sketch of the Sergio Rossi's stiletto shoe - the Eco Pump - which has a sole and heel made of liquid wood).

LONDON (Fortune) -- Frida Giannini, the creative director of Gucci, has designed a $185 limited-edition T-shirt made of organic cotton and natural dyes. Sergio Rossi is launching a stiletto shoe called the Eco Pump, whose sole and heel are made of liquid wood.

At Bottega Veneta, there's a specially-designed environmental tote bag free for customers spending more than $1,500, and Alexander McQueen has come up with a signature scarf featuring a picture of the earth morphed into a skull.

The Gucci Group is going green big time next month, to coincide with the launch of a new movie about the plight of the planet Earth that is being sponsored by Gucci's parent, France's PPR Group.

The movie, called "Home," is by French aerial-photography specialist Yann Arthus-Bertrand, and will be released worldwide on June 5 in movie theaters and on TV in more than 80 countries - and especially online.

Google has agreed to stream the high-definition movie on specially-dedicated YouTube pages for 10 days. In the U.S. it's being distributed by Fox and will be shown on the National Geographic channel.

At a time when sales of luxury goods are reeling from the economic slump, giving brands a green tinge amounts to a different - but potentially risky - way of keeping them in the public eye.

François-Henri Pinault, the CEO of PPR, whose $13 million sponsorship covered most of the movie's costs, insists that he's not supporting the project for its potential effects on business, but as part of a bigger commitment to reduce the company's environmental impact.

"We're not doing this for our revenues," Pinault told Fortune. He acknowledges that there's a risk for a consumer-goods company putting so much emphasis on ecology since it opens the various brands up to criticism of any production methods or products that don't meet a high environmental standard.

"No brand is perfect," Pinault says. "It'll be the responsibility of the brands not to disappoint." He gives one example: "I hope Frida (Giannini) will now say no to using fur."

Whatever the motive, it's an opportunity that the Gucci brands aren't letting pass by - and are eager to tell the world about their philanthropy. Profits from most of the products will be donated to a charity that Arthus-Bertrand founded.

Stella McCartney may end up making the biggest splash. A vegetarian who has long refused to use leather or fur in her designs, McCartney is planning to host a special screening of the movie at her store in West Hollywood on June 5 with a range of VIPs in attendance, including Laura Dern, Ben Harper, Anjelica Huston and Salma Hayek - who is married to Pinault

By Peter Gumbel, Europe editor
Posted by once upon a time... at 4:01 PM No comments:

OMG! How cool is this. Every beach girls dream! Get your sketch pads out and get started! See the link below for all the details from Roxy. 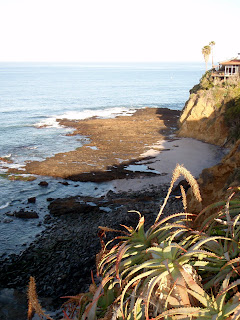 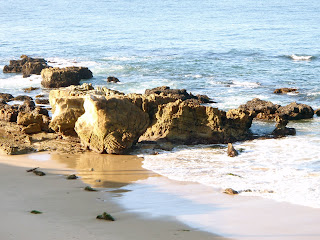 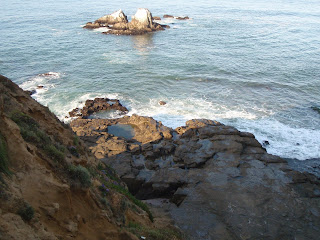 Here are some fabulous photos of Laguna Beach Easter morning. Summer is quickly approaching! Get out there and enjoy the quiet beaches while you can before the season hits. Remember to respect the beach, the creatures that live there, and to take your trash with you. Happy beach days!