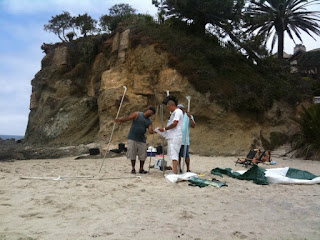 Not your normal beach crew in Laguna but they seem nice. Don't think
his hair will stay put after a dip in the ocean, but will see.

This crew from the Inland Empire (I'm stereotyping), decided to come to Laguna for a fabulous beach day. They brought more beach gear than locals due, one of those items being a tent (that's a no no). They spend an hour setting up the tent and once it's all finished, the life guard walks over to them and tells them tents aren't aloud and if they leave it up they will be fined. Of course the lifeguard didn't say anything until after he watched them set it up. I like the lifeguards sense of humor :)
Posted by once upon a time... at 12:35 PM No comments: