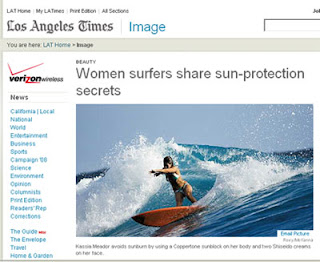 While baking in the sun feels great and a golden tan looks even better, the rays damaging effects aren't even slightly desirable. It may take a few years to notice why, but sun spots and wrinkles are not attractive. Beyond that, the risk for cancer is just too high.

Get a couple of skin saving tips from surfing pro, Kassia Meador. She's in the sun all the time but is smart about it and does her part to protect her body. Meador shared her "skin saving secrets" in this LA Times article. A couple of her favorite products include Coppertone Sport Sunblock Lotion Spray Ultra Sweatproof, SPF 30, for her body and Shiseido's Ultimate Sun Protection Cream, SPF 55 for her face.

SAGE ERICKSON'S day begins before 8 a.m., when she rolls out of bed and stretches for an hour. Then it's off to the C Street beach in Ventura to surf for two hours. After that, there's school, lunch, a five-minute abs workout -- then it's headlong back into the surf where she rips gnarly waves until sundown.

And yet most manage to emerge from the waves looking so dewy and radiant that they have second careers as models.

How do they do it? We asked four pro riders -- Kassia Meador, Katrina Petroni, Alana Blanchard and Erickson (who's finishing her last amateur year and will compete in the U.S. Open of Surfing this week) -- all fierce competitors who spend half their lives in saltwater. Most keep their beauty routines simple, but they're diligent. This new generation of top wave riders is savvier about the harsh effects of surf and sun than their skin-baking predecessors. From a young age, they've been slathering on high SPFs and rich moisturizers and hair conditioners.

"I'm a fanatic about sunscreen, just seeing how many wrinkles surfers get," Erickson says. These beach beauties -- who travel the world competing in tournaments all year -- have tested just about everything. Here are some of their picks and tricks for keeping it together on the beach.

Hold the rays at bay

When you're in the water an average of six hours a day, you need a waterproof sunscreen that stays on even after a few nasty wipeouts. Kassia Meador, a 26-year-old from Oceanside who's considered one of the great female long boarders, uses Coppertone Sport Sunblock Lotion Spray Ultra Sweatproof, SPF 30, on her body. "It's awesome and absorbs straight into skin," she says.

For her face, she slathers on Shiseido's Ultimate Sun Protection Cream, SPF 55. Meador doesn't take chances with sunburn, even though she's naturally olive-skinned. So right before she hits the water, she rubs another layer on her face -- Shiseido Sun Block Stick SPF 35: "It's super-thick and stays on forever."

The sunblock is also a favorite of Katrina Petroni, who lives and trains in Australia and is ranked 73rd on the World Qualifying Tour (the series of events that lead up to the World Championship Tour). "It's great in the water because it never rubs off," she says.

Jessica Wu, an L.A. dermatologist, says sunscreen should be reapplied every two hours when you're on the beach -- whether you're in the water or not -- and recommends finding a sunscreen for your skin type. "If you have really oily skin, you want a product that's not going to be greasy and slip off," says Wu, who prefers Neutrogena Ultra Sheer Dry-Touch Sunblock SPF 55.

For drier skin, she recommends La Roche-Posay Anthelios Water Resistant Sunscreen Cream SPF 30, which contains Mexoryl, the newest sunscreen ingredient to be approved by the FDA. Mexoryl is the most effective ingredient known for protecting against harmful rays. Beach bums in Brazil and France have been using it for years.

Finally, don't forget a lip balm with an SPF of at least 35, even if you plan to wear lip gloss over it. And there's an easy way to protect the vulnerable skin on your shoulders: Wear a T-shirt or a rash guard. Most serious riders do.

Sun and saltwater are natural highlighters, but can turn healthy locks into a bleached bird's nest. So surfer girls are addicted to leave-in conditioners and sun-blocking hair products.

Erickson swears by Redken UV Daily Sun Milk leave-in protective moisturizer, which has an SPF 15, to keep her long blond tresses from over-bleaching. "I put it in 10 minutes before I go surfing," she said.

Alana Blanchard, 18, who grew up surfing in Kauai and is ranked fifth on the World Qualifying Tour, rubs conditioner into her long blond mane every time she gets out of the water (while it's still salty), and combs a quarter-sized dollop of Biosilk Silk Therapy -- an oil-based hair conditioner and styling aid -- through her hair every night. "It soaks into each hair as you sleep," she says, and it's dry by morning.

After a day of globbing on sunscreen, skin can feel as waxy as one of Madame Tussauds' figures, so Wu recommends sprinkling baby powder everywhere to soak up sweat and oil, and remove sand, then showering with a water-based foaming shower gel.

"A moisturizing, heavy soap is going to make you slippery and not take off the sunscreen," she says. Then rehydrate the skin with an even more emollient moisturizer, such as Oil of Olay's Moisture Replenishing Mousse, Wu says, adding, "People always talk about moisturizing more heavily in the winter, but the saltwater really dries out your skin."

Surfer girls like their body moisturizers cheap and basic. Blanchard uses body butters from Bath & Body Works, Meador likes Nivea's signature body lotion and Petroni opts for organic jojoba oil, "because it's natural and, unlike baby oil, it soaks in."

Meador gently scrubs the sunscreen off her face with a loofah pad, then applies Shiseido's Skincare Night Moisture Recharge.

Despite all the precautions, now and then you get burned. Wu recommends two aspirin to reduce swelling and applying cold, green tea compresses: "Green tea has antioxidants that will protect your skin, and the coolness will reduce swelling." Also, eat some cooked tomatoes or a slice of pizza. "It's been proven that tomato paste and cooked tomatoes help reduce the risk of sunburn," Wu says, "even after the fact."

Another reason to be glad that all those pizza shacks line SoCal beaches.
Posted by once upon a time... at 12:36 PM