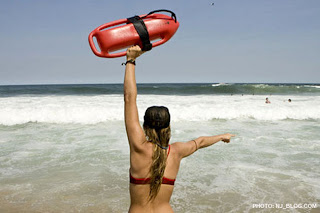 This past weekend, the Volusia County lifeguards in Florida had their work cut out for them with more than 500 water rescues. The majority of saves were due to swimmers getting caught in rip currents. In some cases, entire families were swept away from shore at the same time. Lifeguards say that heavy surf over the last month has contributed to hundreds of rip currents and beach goers have been warned that these conditions could remain for a while. Still with temperatures in the mid- to upper-90s across Central Florida it's hard to keep people out of the water so every lifeguard station was manned and ready last weekend. Luckily, only two people were hospitalized on Friday and they're expected to be OK.
Posted by once upon a time... at 4:56 PM