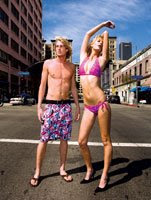 To make a splash in the surf industry, Niels Juul gambled that his company, Hot Tuna International Inc., would have to play the outsider. So he recently moved Hot Tuna away from Orange County, Calif.—home to many of the surf industry’s giants—and set up shop far away from the beach in downtown Los Angeles.

The move kicked off a flurry of activity for the company. Juul opened a Hot Tuna boutique and showroom at 860 S. Los Angeles St. It is in the heart of downtown Los Angeles’ Fashion District, a place more famous for premium-denim showrooms than surf and skate fashion.

The company will debut its Spring 2009 line July 2–4 at Barcelona trade show Bread & Butter and then head Sept. 4–6 to the Action Sports Retailer Trade Expo in San Diego.

Juul has big plans for Hot Tuna. In the next five years, he forecasted, it could grow into a $50 million to $80 million company. Plans are underway to open a boutique in London in August and another in Dubai, United Arab Emirates, possibly in early 2009.

The move to Los Angeles might be unorthodox, but for the Danish-born fashion executive, constructing an identity away from surf’s epicenter might be the way to revive a 39-year-old brand.

Like surfwear brands Quiksilver, Billabong and Rip Curl, Hot Tuna was born in Australia. However, Hot Tuna did not cross the Pacific to establish the brand in the United States. Its 1980s and 1990s glory days were driven by founder Richard Meldrum, according to Juul. After an Australian investors group purchased the trademark for $5 million Australian dollars around 2003, Meldrum retired.

U.K. based investment banker Ranjit Murugason was retained to get Hot Tuna listed on the Alternative Investment Market (AIM) of the London Stock Exchange. It was listed in 2005, and 7 million British pounds, or $15 million, was raised for the company.

While Hot Tuna’s board of directors scored some coups, such as placing Australian supermodel Elle Macpherson on its board, Juul alleged the company suffered from mismanagement. Juul was named the company’s global chief executive in June 2007 to help the brand carve a new niche. On April 10, 2008, Murugason resigned as the company’s non-executive chairman, leaving Juul at the head of the company.

Juul had formerly worked at Los Angeles–based brand Von Dutch as an executive vice president. When he took the reins of Hot Tuna, he found an organization he believed to be overly bureaucratic, with its operations spread over the far-flung locales of London, Sydney and Costa Mesa, Calif., and its distribution and sourcing operations troubled.

Last year, Juul slashed 25 jobs at the company to bring the staff to its present number of 22. He argued that the duties of the cut jobs were already being performed by those in the 22 remaining jobs.

These days, the organization’s headquarters are still separated by continents and oceans.

In April, Juul traveled to Australia to meet with Meldrum so they could dust off the qualities that made Hot Tuna special. After requisite bonding by surfing a few waves, Juul found that Meldrum made Hot Tuna stand out with outrageous humor and a fashion look that may have been more cosmopolitan Sydney than the Aussie surf destination Bells Beach. It basically was more fashion than sports.

“It was not mainstream,” Juul said. “It never took itself seriously. The logo is a piranha. The name is Hot Tuna. We can make fun of everything.”

Unlike Billabong, Roxy or the other surf-centric brands that already dominate the market, Hot Tuna stands apart, said women’s designer Kenney. “It’s beach and surf in the city,” she said. “There’s not one hibiscus flower in the prints [of the new line].”

Traditional surf graphics were avoided in favor of swimwear and surf designs such as New Wave graphics of lips and eyes. There are also lipstick-tube patterns and prints of Navajo rugs.

Swimwear silhouettes will be the traditional Brazilian and American bikini looks as well as European styles to appeal to the burgeoning English and Spanish markets. Other women’s styles include maxi-dresses, silk jumpers, V-neck T-shirts and motorcycle-style jackets.

Retail price points range from $39 for a T-shirt to $180 for a silk dress and $80 to $100 for a bikini set. Hot Tuna’s drive to appeal to fashion as well as surf shops is a good idea, said market researcher Cary Allington. He is co-owner of Action Watch, a Loma Linda, Calif.–based market-research group for the surf and skate industries. He said the weak American economy has divided retailers on merchandising.

“Some retailers have tightened up. They are focusing on brands that they can do volume with, and they are cutting out brands that are not dependable,” Allington said. “Others will jump into new brands because they want to differentiate their product.”

Hot Tuna’s focus on fashion comes at a fortuitous time, when the surf and skate market is shifting to more-sophisticated looks, said Frank Delgadillo, founder and partner with Irvine, Calif.–based Ambiguous Industries. “A pair of flip-flops and boardshorts is not going to do it,” Delgadillo said. “For the past five years, guys have cared what they look like.”

He also said that with so many brands vying for consumers, surf and skate labels have been forced to design better products.

Juul said that quality and product control will be one of his focuses at Hot Tuna. He said he plans to draw on his experiences at Von Dutch, recalling a time when the Von Dutch executives discovered a line of Japanese-produced toasters bearing the Von Dutch logo. According to Juul, no one remembered giving company approval for the product.

“You’ve got to have tight control on your brand,” he said. “You have to be prepared for success. Those were two of the lessons I learned there.”

Article by Andrew Asch, Retail Editor for California Apparel News.
Posted by once upon a time... at 10:59 AM